Materials: A living goldfish in a battery jar for each two students. Goldfish may be kept indefinitely in a glass jar with green water plants; the latter supply the fish with food and oxygen, Perch, and if possible the heads of large fishes like the cod, should be obtained, preserved in formlin (5 percent) and then thoroughly washed in running water for twenty-four hours before they are used; material treated in this way loses its fishy smell, and may be kept in the formalin solution year after year. A fish skeleton is also need: for demonstration. The Jung charts of the external and internal structure of the perch are useful. Observe a living goldfish and compare it with Figure 90.
1. Name the regions of its body and state, with reference to gill cover and fins, where each region begins and ends.
2. Name and locate all the· organs you find on the head.
3. What paired and what unpaired fins are found on the trunk? Using the terms anterior, posterior, dorsal, ventral, median, and lateral, locate each of these fins.
4. Name and locate the fins- attached to the . tail region of the body.
5. Make an outline sketch about five inches long of the side view of a · living goldfish to show the shape and relative size of the three regions, the position and shape of the organs of the head and of the various kinds of fins. Label the regions and the organs that you have drawn, in a manner similar to Figure 90.
92. Some differences in the form of fishes
-one can usually tell whether or not an animal is a fish; but in some cases this is extremely difficult. Who would think, for instance, that such animals as the sea horse (fig. 91) and the pipefish (fig. 92) would be classed with the perch and goldfish? Yet such is the case, since careful study has shown that these forms have all the characteristics mentioned in 89.
It is evident that the goldfish and perch have bodies that are considerably longer than they are wide or deep, and this is true of most of the common fishes. In the group of fishes known as the eels… 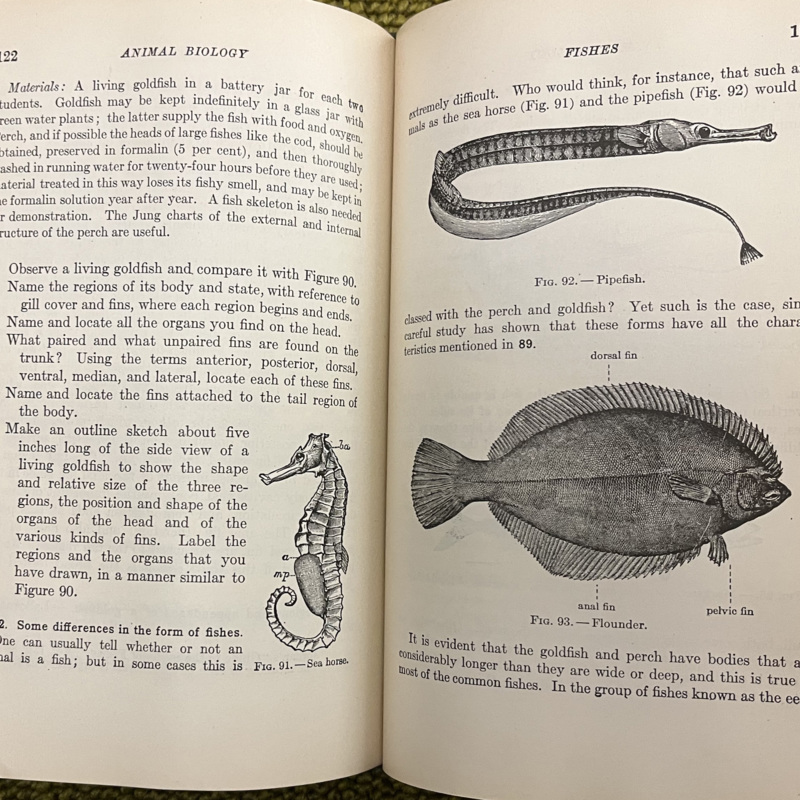