Plant and Animal Children: How They Grow

Plant and Animal Children: How They Grow

…tangled up together inside the gill-pocket. They soon leave their mother, however, through one of the tubes near her back, and swim about by themselves for a time in the water. They would soon tire of this , however, so by means of the little hooks on their three-cornered shells they fasten themselves to some passing fish. Life now becomes full of change for them. Not only are they carried about by the fish from place to place, up the shallows
and down into pools, but each mussel changes its form many times while riding about, and at
last becomes exactly like its parents. At this time the fish is abandoned, and the mussel goes off to live in the mud or sand just as the mother and father mussel did before it. There is no need of building a house, for that has been made while the mussel has been sailing; so all that is necessary to do is to carry the house along. of course you guess that the house is really the shell. And you would like to know just how this shell is made?

You will remember that the mussel has a mantle or soft covering its body. When we buy a coart or mantle it is likely soon to become worn and unfit for use;- not so the mussel’s mantle. This not only does not become worn, but it makes the outer covering for the mussel which we have called the house or shell. There are three parts to the shell: the outer horny part; the middle chalky part; and the inner, colored, shiny part, which is often called mother-of-pearl, and from which buttons and knife-handles are made. The entire mantle works to make the inner, shiny layer; but the two outer layers are made by the edge of the mantle and if destroyed, cannot be mended or built over again. Sometimes it happens that the young of a worm creeps between the shell and the mantle,… 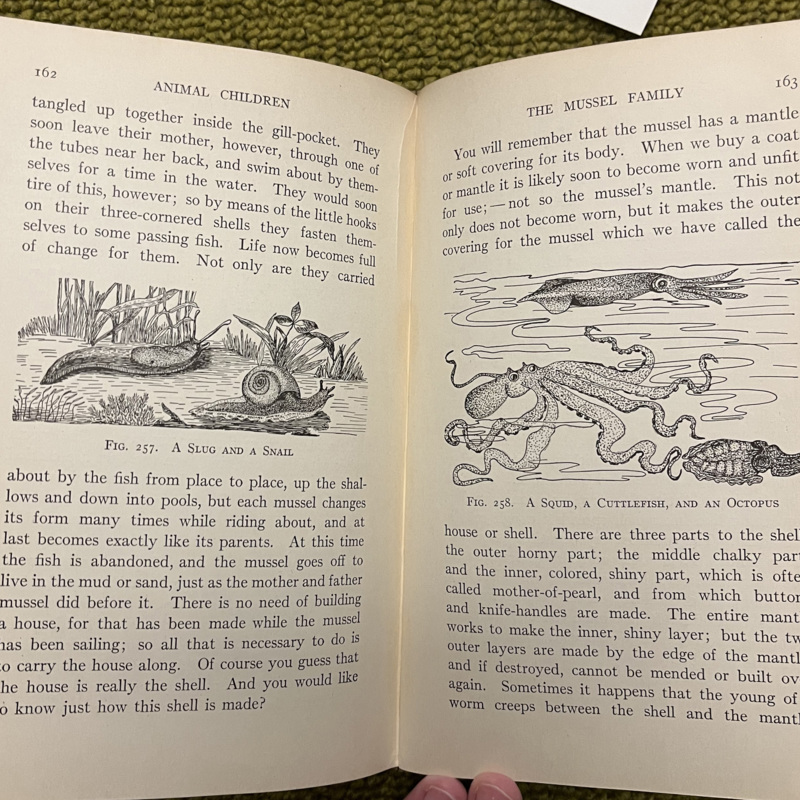