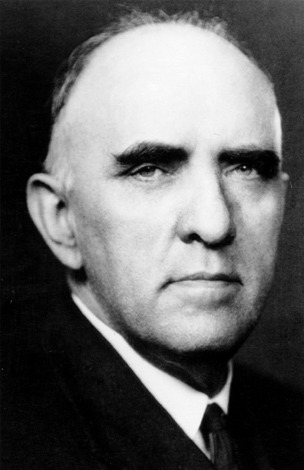 Born on Feb. 12, 1871, in Cartage, MO., Linnaeus Hines' education included elementary and high school work in Noblesville, IN., and a Bachelor's Degree from Indiana University.

Later, he worked at Evansville High School and enrolled at Cornell University to take post graduate work.  His teaching career continued in 1900 as a math instructor at Shortridge High School.  From 1901 he was superintendent of schools at Union City and from 1906 to 1908 he served in the same capacity at Hartford City.  He was then elected to head the Crawfordsville school system, a position he held for 11 years.  As a result of his years of service, he was awarded an Honorary Degree form Wabash College in 1909.

In 1918 and again in 1920, Hines was elected State Superintendent of Public Instruction, a position he filled until becoming the fourth president of the Indiana State Normal School in 1921, at age 50.

The president of the Normal School and the Eastern Division (now Ball State University), Hines instituted a building program, which included a new physical education building, dormitories and a laboratory school for the training of teachers.  In a short period of time, enrollment had doubled.

Hines also establish programs in student activities and helped strengthened the alumni association.  He was instrumental in aiding the institution's transformation from Indiana State Normal School to Indiana State Teachers College in 1929.

During his tenure, a statewide system of extension courses was offered for the first time; the first master's degree was awarded; the Eastern Division became Ball State Teachers College (with Benjamin F. Burris as its president); Reeve Hall (Women's Residence Hall) opened its doors; the city of Terre haute appropriated $30,000 to purchase a site for a new gymnasium; and the ISU Foundation was established.

In 1932, Hines suffered a stroke and was forced to live the last four years of his life in a wheelchair.  He submitted his resignation June 8, 1933.  After his retirement, he continued to serve as director of extension, placement and student activities.