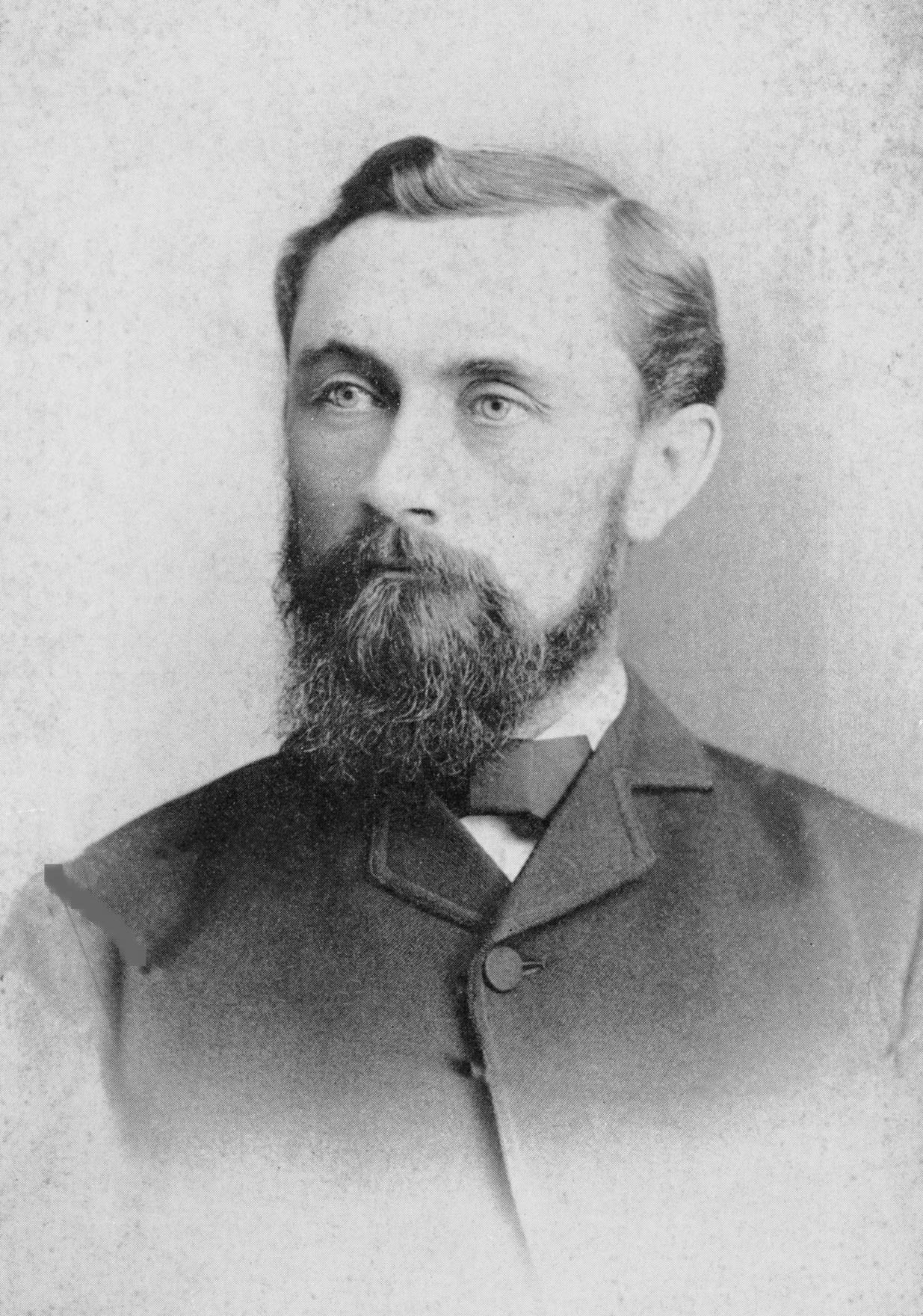 William Albert Jones was born in East Haddam Connecticut, June 17, 1830.  After his mother died when he was five, he lived for a few years with an uncle before returning to his father.  His education was confined to the Connecticut district schools and to Williston Academy from which he graduated in 1849.  Like most academic leaders in that era of limited educational opportunities he was essentially a self educated man who read widely and voraciously.  Although Indiana State Normal catalogs later listed an A. M. degree after his name, the degree was honorary and not earned.

Jones' formal educational attainments consisted only of what at that time was the equivalent of a high school diploma.  He did not attend either normal school or college.  After graduation from Williston, he taught briefly at a district school in Bristol, Connecticut, and then helped manage a small manufacturing plant at Torrington, also in Connecticut.  His family consisted of his wife, the former Caroline E. Wilson whom he married at Litchfield, Connecticut in 1852, three sons and a daughter.  In 1856, the family moved to Illinois where Jones spent seven years as superintendent of the public schools at Altoona and six more in the same capacity at Aurora.

On November 21, 1869, only a month and a half before Indiana State Normal School opened its doors, William A. Jones was elected president of the faculty by the Board of Trustees.  He was 39 years old, a studious, reserved young administrator with a philosophic cast of mind.  While in Illinois, he had participated in a select study group organized by William T. Harris, who was at the time, superintendent of the St. Louis schools and later U.S. Commissioner of Education.  The group concentrated upon German philosophy, especially the works of Kant and Hegel.  For Jones, this involvement resulted in a lifelong commitment to the employment of Hegelian insights in an effort to systemize and improve American education.  Jones' abstract, analytical approach to the learning process was evident not only in the first Normal School course of study and during his administration, but for many years thereafter.  A narrow, "no frills" curriculum was provided without the classical accouterments of Greek and Latin.  Jones fully appreciated the value of broader scholarship, but he also knew that in order to achieve the state's mission to train "common school" (the equivalent of an eighth grade education) teachers, the Normal School must limit its objectives to the treatment of the eight "common School" branches -  grammar, spelling, reading, writing, arithmetic, geography, physiology, and U.S. history - as prescribed by Indiana law.

Although there were relatively few courses in the curriculum, each course was taught systematically and with uncommon thoroughness.  Mastery of the "common school" subjects meant more than a knowledge of the facts involved; it meant an understanding of the mental processes by which that knowledge was acquired and the development of a method of instruction based upon that understanding.  All subjects were studied from the teacher's perspective.  The concepts, principles and "laws" of each discipline were to be identified and mastered.

Jones often summed up his approach as, "The fact in the thing, the law in the mind, and the method of both."  This perplexing formula apparently had profound meaning for hundreds of Indiana State Normal students and faculty.  It became, in fact, the Normal School's guiding principle for several decades.  William Wood Parsons a 1872 Indiana State Normal graduate and later third president of the Normal School from 1885 to 1921, maintained through his career an almost reverential dedication to the spirit and ideas of his mentor as is revealed in this tribute in 1913:

Teaching was Jones' forte. As president of Indiana State Normal, he taught the didactics courses - the core of the school's teacher preparation curriculum. One of his students later recalled, "In his classroom he was one of the students - in truth, he was the leading member of the class. There was no frigid atmosphere there. No manifestation of egotism emanated from the teacher's desk." He deplored platitudes and glittering generalities, insisting upon clear, precise thinking which could be communicated in the simplest terms possible. commanding both the respect and affection of his students, Jones recognized that they expected him to be the master teacher, and he did not disappoint them.

Some of Jones' detractors, including the Indiana State Normal board of Trustees, were critical of him for not doing more to increase enrollments during a difficult period when the institution was struggling for survival.  To the assertion that "if the school did not lower its standards it would have to close its doors," Jones replied, "If it was conducted at any lower level, it should close its doors!"  Is it any wonder that such sentiments won him the plaudits and affection of his faculty?

Through their devotion was  admirable, they  were too self-satisfied

Jones recognized that his greatest challenges as president of the faculty were first, to give shape and focus for the Normal School's academic program, and second, to provide leadership for his small faculty.  These things he did with determination and, in the end considerable success.

Frequent faculty meetings, at which the president presided, provided a forum for the inculcation of his ideas.  During the nine years of his administration, he personally hired all faculty members.  these men and women were, with few exceptions, Normal School graduates who shared their president's philosophy of teacher education.  The depth of their commitment to him is best revealed in the mass resignation of 1881 after only minor adjustments had been made in Jones' program and approaches.

While admirable as evidence of their devotion, the mass resignation reveals a less estimable aspect of Jones and his loyal band.  They were simply too self-assured, too convinced that they had answered all the basic educational questions, too supremely confident in their own objectives and methods.  That degree of certitude, especially as it relates to educational theory, consequences in the quest for knowledge and understanding.

Not a Gregarious Man

Jones was also criticized on occasion for his propensity to hold himself aloof from students, faculty and community. When encountering acquaintances on or off campus, it was said that he always seemed preoccupied and rarely spoke. A tall, handsome man with steel gray eyes, fair complexion and a carefully trimmed mustache, he was simply not a gregarious person. Reserved and reticent by nature, he felt further constrained by his position to hold himself in reserve. The fact that he lived seven miles north of campus, traveling to and from school on horseback, may be further evidence that he was and wanted to be a very private person. Following his example, his faculty studiously avoided extensive contacts with Indiana State Normal students.

Beyond his academic responsibilities, President Jones was fortunate in that he was not also expected to double as a public relations agent and fund raiser, as is the lot of modern college and university presidents.  He was, of course, held to strict accountability by the Board of Trustees in his management of the meager Normal School budget.  Ever expenditure, down to the cost of cloakroom hooks, was itemized and then carefully scrutinized.  But the scope of the Normal School's financial operation was so small and the level of state support so disappointing ($10,000 in 1870 or which $3,500 went for Jones' salary) that the president had little opportunity for economic innovation.  No administrative or clerical staff was necessary.  Only a few dependable janitors were required to keep the three floors of the Normal School building clean and its consistently undependable heating system in operation.  After the elaborate heating system planned for the new building failed, cast iron coal stoves were installed.  Smoke from the stoves and from the oil lamps used for lighting added to the blight of a murky atmosphere, helping make the building dirty, cold and a fire hazard.  (It was totally destroyed by fire in 1888).  The Board of Trustees might ponder such weighty questions as how to keep the cows off the Normal School yard, but the president seldom gave his attention to such mundane matters.

Plagued by perennial financial problems, forced to accept a sharp salary reduction in 1877, and afflicted by illness in 1878, Jones resigned the presidency in 1879.  He was only 49.  Reason of health, which were never explained, were given for his rather sudden departure.  Strangely, his career as an educator ended abruptly with his resignation.  Although he lived for another 26 years, his career in education was over except for a brief two-year term as superintendent of the Institute for the Blind in Nebraska City and an unsuccessful race for Nebraska superintendent of Public Instruction on the Populist ticket in 1894.  He lived in Terre Haute until 1883, when he moved to Hastings, Nebraska where he remained until his death of pneumonia on November 13, 1905.

An educational administrator with rare talent and insight, William A. Jones was an inspiring teacher and effective leader of this faculty.  The foundations of teacher education which he laid as Indiana State's first president remained firm for more that a half century after his departure.

Dr. Rissler is the former chairman of ISU's History Department.