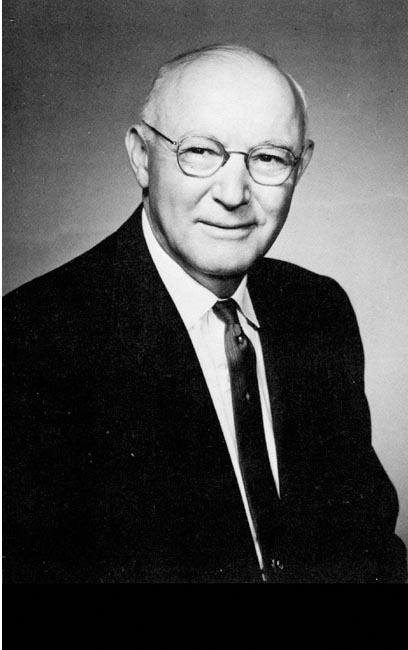 Changing the College to a University

Raleigh Holmstedt came to Indiana State Teachers college from St. Edward Nebraska, where he was born March 24, 1899.  The oldest of 15 children, he received his bachelor's degree, with honors, from Hastings College in Nebraska.  He later earned his master's and Ph.D. degrees from Columbia University Teachers College and was recognized for his expertise in the fields of school administration and school finance.

Holmstedt began his teaching career as an instructor and coach at Nebraska School of Agriculture in Curtis.  He joined the Indiana University faculty in 1929, and, in 1930, married Mary S. Power.  Holmstedt remained at Indiana University until he assumed the presidency at Indiana State Teachers College in 1953.

Author of the State Aid Bill-with formulas for state financial support for public schools in Indiana- Holmstedt also served as a consultant for the Survey of Administration and Finance for the New York City school system in 1942.  He later held the same position for Washington, D.C., in 1948.

In 1943, while a faculty member at Indiana University, Holmstedt served in World War II and graduated form the School of Military government at the University of Virginia.  He served as chief of education and religious affairs in Kassel, Germany, form 1945 to 1946 and was discharged from the service with the rank of major.

During his years as president, there was a surge in campus construction as nine residence halls and nine buildings were constructed and five others were remodeled.  New facilities included the new Science building, the Physical Education building (Arena), Erickson, Sandison, Blumberg, Cromwell, Gillum and Pickerl halls. Condit House was acquired, and the College of Arts and Sciences and the Schools of Education, Nursing and Business were established.

In 1961, Indiana State Teachers College became Indiana State College.  Programs were added at both undergraduate and graduate levels, and the first doctoral degrees were awarded in a joint program with Indiana University.  The institution experienced tremendous increases in enrollment and earned recognition as a comprehensive university.

The college moved from a quarter system to semesters, and the acreage on campus grew by 30, in addition to another 60 acres just south of Brazil.  But the most dramatic change came in 1965 when Indiana State College finally became Indiana State University.